The Prepared Pantry
M17-1
$4.49
This is our bestselling sandwich bread. Learn why. It's light and soft and fluffy.  It's as good as homemade bread gets and yet it holds together so it's great for sandwiches. Everyone likes it.  Even the kids. But what's the secret? What makes it so good? This is our answer...
Description

This is our bestselling sandwich bread. Learn why.

It's light and soft and fluffy.  It's as good as homemade bread gets and yet it holds together so it's great for sandwiches.

Everyone likes it.  Even the kids.

But what's the secret? What makes it so good?

This is our answer to the fluffy, soft loaves you find in the store. But we left out all the preservatives. You don't need them if you're making your own bread. It's not going to stay in a warehouse for three weeks. Now you're talking homemade.

And it tastes better. Dairy always makes bread taste better. Each loaf has the equivalent of 3/4's cup of fresh milk. Because of the butter and milk, it is richer than most white breads. So it's moist, soft, and tastes better--just like the bread your grandmother used to make.

Check it out for yourself.

Use a thermometer to check water temperature and we guarantee your bread will work.

This recipe makes our favorite clam chowder. It calls for clams and bacon, potatoes, and onions. It’s seasoned with a spice blend, Gresham and Meyers Seafood Blend. It adds tons of flavor and a touch of heat—just right for a gringo like me. If you don’t have this blend, try some thyme with a bit of marjoram. Many recipes don’t use anything but pepper.

But first, let’s look at the tips and techniques from The Culinary Institute

Techniques for Making a Clam Chowder with Bacon

If you like chowder, you should try this recipe. It is an easy-to-make recipe that uses canned clams. You can get larger cans of clams at Sam’s Club. Because this recipe also has bacon, it calls for fewer clams.

This is a very meaty recipe. If you want a less meaty chowder, thin it with milk as you finish cooking it. 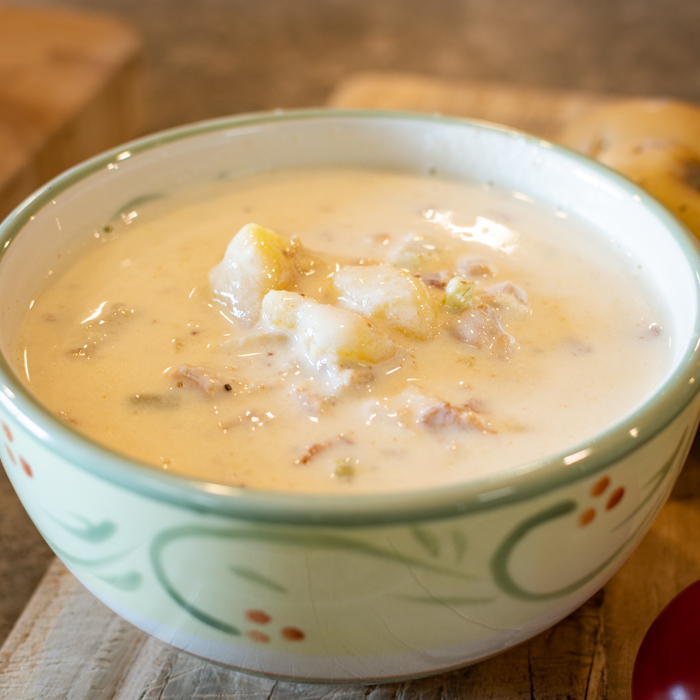 What People Are Saying


"This is REALLY good bread. rolls, sandwiches bread, and butter this one is what I remember my school rolls being like. VERY Good! Will purchase again"

Directions for Use in Oven

To bake this mix in your oven, follow the directions on the package.

NOTE: If you make this bread in your bread machine, water temperature is critical. Please use a thermometer to measure water at 80F and we'll guarantee the bread. If you are baking the bread in the oven, use water that is 110F.

Based on 1 review Write a review
Shipping & Returns