The third way to make stuffed bread is jelly-roll fashion.  We are most familiar with this as cinnamon raisin bread but you can use any filling—sweet or savory—that pleases you.   We’ll show you how by making Mushroom Cheddar Oat Bread.

For this bread, we used our Old-Fashioned Oat Bread Mix which makes two loaves.  If you prefer to use your bread machine or only make one loaf, try Country Farm Oat Bread.  Of course, you can always retrieve your favorite bread recipe from the cookbook.  We like the chewy goodness of oats with this combination.

Mix the bread according to directions.  Let it rise, covered, in a bowl.  Roll the dough, one loaf at a time, on clean counter until the dough is 1/4-inch thick and in the shape of a rough rectangle. 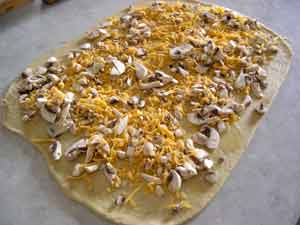 Spread melted butter, mayonnaise, or mustard on the dough, cover with filling, and roll into a tight cylinder.  (See below for the recipe for this filling.)  Pinch the seams together.  Place the dough in a greased loaf pan with the seam down.

There’s a trick to making these breads turn out right.  The heavier the fillings, the more likely it is that the layers will pull apart as they rise leaving a void between the layers caused by trapped gases from the yeast.  We reduce those voids by creating vents for the gas to escape.  It won’t eliminate them but it helps.

Once the loaf is in the pan, before the bread begins its second rising, take a sharp knife and slice the tops lengthwise, one slice at ten o’clock and another at two o’clock.  The cuts should pierce the first layer of dough so that gas trapped between these layers can escape.  (See the picture.)  Cover the loaves and let them rise until doubled. 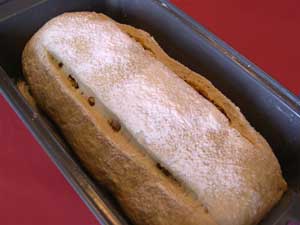 After the bread is rolled into a 1/4-inch thick rectangle, spread the mustard on the surface of the dough.  Mix the remaining ingredients and spread them on the dough.